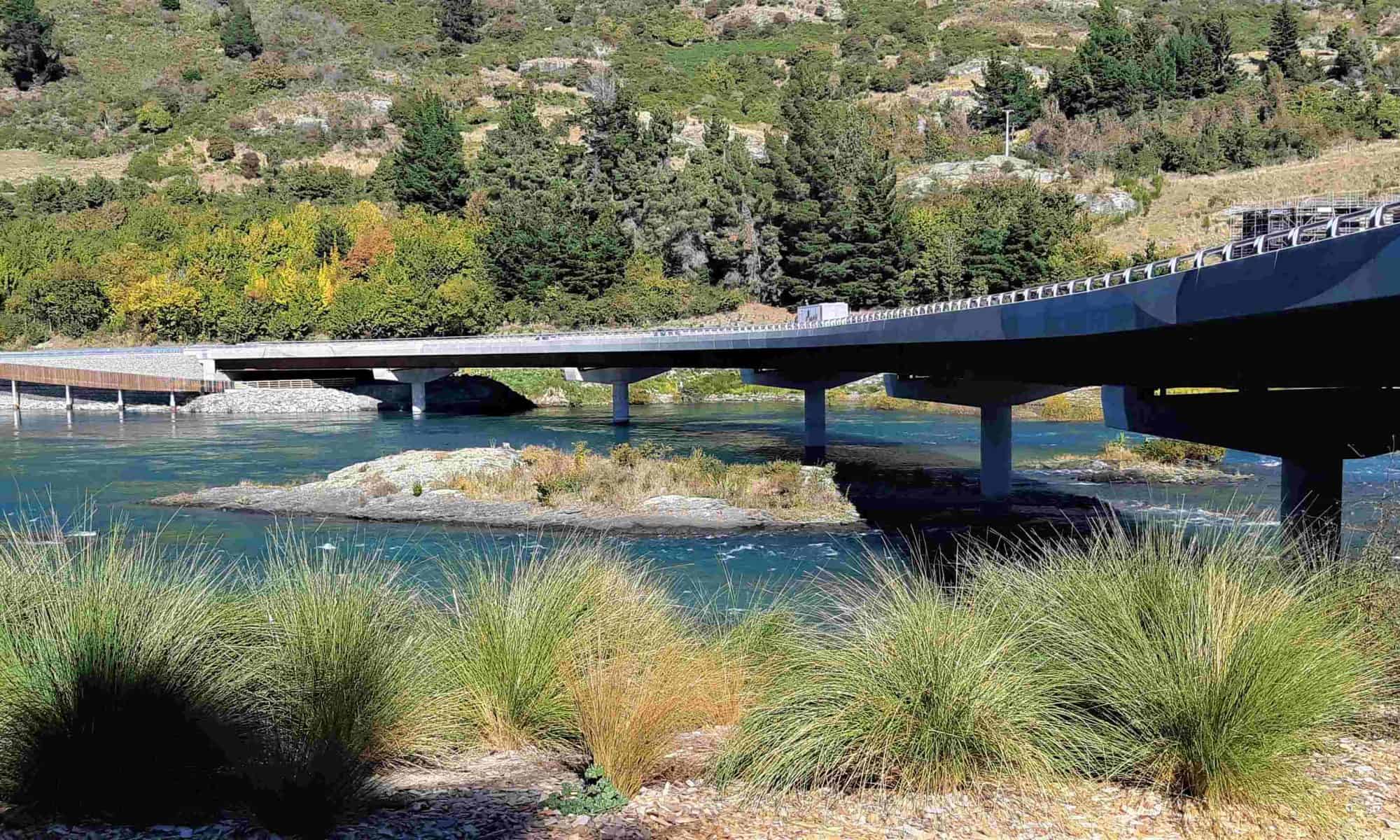 If you’re a tourist, or new to Queenstown you probably sweep over the new Kawarau Falls bridge without giving it a second thought.

But I never take it for granted. In fact, I’m still pinching myself to check that it’s real.

Because trying to cross the old one-way bridge used to be a nightmare.

For years we called it a bridge, but the old girl was actually a dam.  Although, she never quite managed to stop the river water flowing.

Here’s how it happened.

There’s Gold In That River

Back in the day, there was gold galore around Queenstown. Some made fortunes — others lost everything. But, like we do today, people were always on the lookout for the next big thing.

Further down the Kawarau River miners worked hard to pan the alluvial gold. But many were convinced that there was a fortune in gold-bearing rock on the riverbed.

Unfortunately, the river was always too full and fast to get it out.

Someone had a bright idea. “Let’s dam the falls,” they suggested. “The water level will fall. Then we’ll get the gold.”

What could possibly go wrong?

So, in 1924, they began building 10 massive gates between sturdy concrete pillars over the Kawarau Falls. The engineers planned to get the job done in months but that was never a realistic target. In reality, the dam took two years to build.

Actually, I think two years was a pretty good effort. With all today’s modern equipment it seemed to take an eternity to build our newest bridge.

In front of a huge crowd of spectators engineers lowered the gates and the river level dropped… but not for long.

Somehow, in the rush for gold the engineers had forgotten a rather important fact. Downstream was the equally gold-rich Shotover River busily emptying all its water into the Kawarau.

So, it didn’t take long for the Shotover to fill up the riverbed once more.

Imagine their dismay when the river only dropped a metre which was nowhere near enough to get the gold.

Reluctantly, the engineers admitted defeat. They raised the gates and the Kawarau River flowed free once more.

As a dam, it was a costly failure, but it had a silver lining. At last, there was an easy link between Frankton and the rich farming country to the south.

So now it made sense to build a road around the lake to Kingston. In 1936 that road was finished and the dam took on a new role.

It was never intended to be crossed by cars and trucks. So we’ll have to give a shout out to the dam’s designers, engineers and maintenance crews. Because cars, campervans, trailers and trucks all crossed over that dam bridge every day for 92 more years.

But it was hell to use in rush hour.

Then, the traffic inched along without a break. Bad luck if you were going against the flow. I’ve been stuck there a long time waiting for someone to stop and let me across.

They were a mixed blessing. Sure it was easier to cross in busy times – but it made your blood boil to be staring at a red light when NOTHING was coming the other way.

Even tales of woe have their funny side.

Most locals have a story to tell about driving over the old bridge. I happened to meet a friend out walking one day, and he told me a funny old tale.

Not so long before he retired, Ivan — an Athol farmer of many years —  drove himself up the snowy road to the High Country Farmers Winter Conference.

But, as he crossed the narrow bridge his old car skidded on the slippery boards.

Luckily he didn’t crash through the rails and into the river.

Unluckily, the car stopped dead: neatly wedged across the middle of the one-way bridge. Oops!

Long lines of traffic banked up as far as the eye could see on both sides of the bridge while shivering rescuers worked to free our unfortunate farmer.

Bad enough to have an accident, but worse was to come.

Next day, newspaper reports told of emergency services rushing to rescue the elderly man whose car had caused the delay.

Ivan was mortified about skidding, and sheepish about all the fuss. But mostly he was furious at the reporter who dared to call him ELDERLY.

Finally They Began The New Bridge

In 2016 McConnell Dowell started the sweeping new bridge. And we discovered a whole new level of traffic-jam-pain.

If your trip was early or late — you’d be fine. But, at peak times you had two options.

2) Get caught in a traffic jam.

At least the locals were forewarned. Sitting in the queue I used to wonder how many unwary travellers had missed their flights because they were stuck on the bridge?

We waited and watched through the months as the new bridge slowly took shape.

Trees were felled. Temporary decks came and went. They drilled piles… built piers… rolled out new decking and finally — FINALLY — on May 10th, 2018 they took all the cones and barriers away. At last we could drive, unobstructed, over our brand new bridge.

However, the historic dam was being restored too — and there was still plenty of work to finish. Resurface the deck. Strengthen and paint. Build underpasses and paths to connect everything together. Slowly, it all came together.

It Was Worth The Pain

It felt like forever, but finally everything is finished.

My heartfelt thanks go out to all the people who dedicated long hours to getting this momentous job done and dusted!

One fine April day I wandered over the two bridges — old and new — to see how things have changed.

It was fun discovering all the old and new additions to this part of the Queenstown Trails. If you’ve got an hour to spare, why not give it a go yourself.

4 Replies to “Bridging The Kawarau Falls”