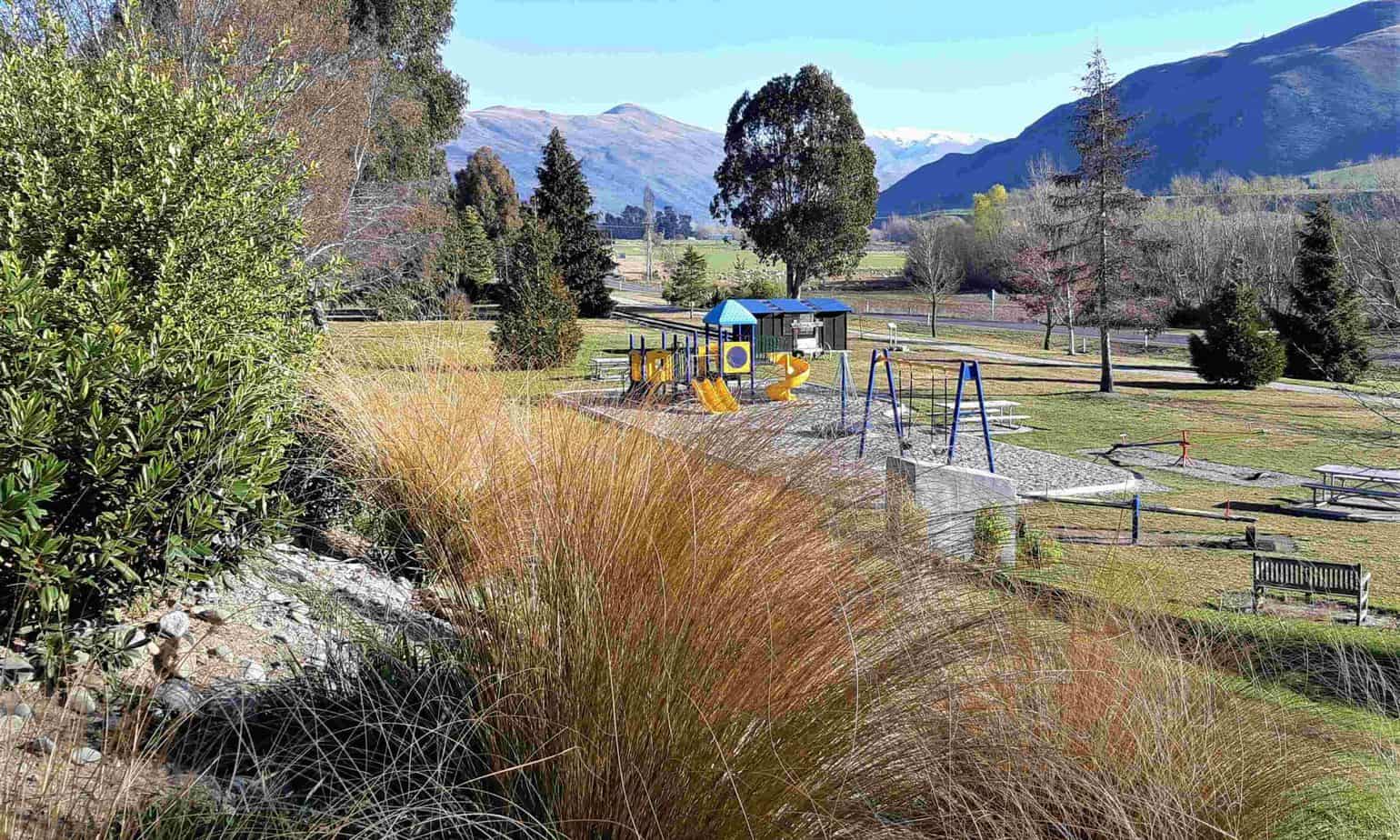 I’ve lived on a farm in Garston for 35+ years so that almost makes me a local. But my husband is truly Garston born and bred. His family were one of the first to settle in the valley when it was opened up to farmers in the 1860s and the McNamees have been here ever since.

So for our family, the ties to Garston run very deep, and we’d find it pretty difficult to leave.

But what is it that makes this quiet country village so hard to beat?

The village is set in the narrow Upper Mataura River Valley, and mountains range on either side, as far as the eye can see. Their beauty is different from the craggy splendour of Queenstown’s Remarkables range. Ours are “working” mountains; home to animals — farmed and wild —  rare bugs, mountain plants and above all, the golden tussocks which colour the landscape.

Above the village, hidden terraces slope in layers up to the foot of the mountains, and this is where our house can be found. When I step out of the back door for my daily walk there is not a soul to be seen. It’s just me, the birds and the sheep.

When Europeans first arrived they farmed the Upper Mataura Valley as one giant sheep station. But later on the area was divided into 200-acre sections and these were balloted out to small farmers and settlers.

And that’s where the modern history in Garston begins. Our family came from the lean pickings of the gold claims in the Skippers Valley to try their luck at farming. Others made money killing rabbits — a lucrative enough trade in those days to enable them to save enough to buy into a farm. Some came from family farms further north or south.

Life was pretty tough in those early days. The valley had very few trees back then and firewood was in short supply. The winters were brutal. There’s a famous tale of one long-ago winter when the deep snow lasted for so long that the settlers had to use their carefully-hoarded fence posts for firewood just to survive.

Money was scarce too. The kids walked to school from farms dotted around the countryside whether they had shoes or not. My father-in-law used to say:

“We never minded stepping in a cow pat on the way to school —  at least it warmed our feet up.”

I still don’t know if he was joking or not.

There’s gold in them thar hills. Or at least there used to be.

Shortly after the settlers arrived gold was discovered in creeks and cracks all around, and life got busy as the gold miners flooded in. They came from all over the world to try their luck, set up camp for a while and livened up the area.

Eventually, the gold became too difficult to find, and the miners drifted away to try their luck elsewhere. They left reminders of their stay, with a little cluster of Chinese miners’ graves in the cemetery, and the great water races which they dug high in the mountains to supply water for the great sluice guns in the Nokomai Valley just beyond Garston.

It’s easy to guess that Garston is proud of its history. One of the first things that stands out when you stop is the information booth, which was updated after much collaboration by local historians. And when you start to look around you’ll find caring memorials all over the Garston Green.

North of the shops you’ll find the picnic area dedicated to John Newman, a former owner of the Garston Hotel, who planted so many of the trees between Athol and Arrowtown. Take a stroll towards the tree-covered hillside nearby and you’ll find a gorgeous little walk called Newman’s Way which takes you up over the knoll to Garston School.

Further down the Green, you’ll find tributes to the time when the trains ran in Garston because when the railway opened in 1878 it was a huge boon to the area.

In those days before sealed roads, fast cars and huge articulated trucks, trains were the best and fastest way to travel the long distance between the “big smoke” of Invercargill in the South and Kingston — the gateway to Lake Wakatipu and Queenstown — in the North.

Farmers transported stock in and out of the valley by rail right up until the early 1970s.

Even when trucks took over the job, the famous Kingston Flyer steam train ran through Garston as a tourist attraction until 1979, when floods damaged the railway tracks so badly that the whole line closed.

Garston doesn’t forget, though. On the Green, you’ll find tracks, trucks and a display of antique jiggers. There, too, is a loving memorial to Russell Glendinning, a towering figure in local railway lore.

Peter Rabbit’s House has been a special secret in Garston for a long time now. It’s a bit of a  mystery; who did put out that little clothesline and Peter Rabbit sign next to the rabbit hole? Whoever it was, I hope they know how their whimsy brought smiles, and that gradually other, secret “rabbit paraphernalia” appeared.

The House expanded in 2017 when the Garston School children decided that Peter needed company, and made a whole replica gold-mining era village.

No one will tell you whereabouts Peter Rabbit’s Village is in Garston. To this day it’s still a delightful surprise to discover for yourself.

Winding through the valley, the Mataura River is world-renowned for its trout. People come from all over the globe to try their luck in the cool, clear waters during the fly-fishing season. Some eat their catch or mount it to sit proudly on a wall.

But others are simply there for the love of the fish and the sport. Those intrepid fishermen are found in the tricky “catch and release” sections of the river. Some of the fish there are huge — and wily — having been caught and released more than once over the years.

My favourite river memories are set in the 1990s. Baking summer days, at the stony beach under the old railway bridge where all the local mums and kids gathered to cool off.

The children floated down the river on giant old inner-tubes from their dads’ tractors, jumped off the rocks and ate enormous afternoon teas. The bravest of them hung over the rail of the towering bridge above.

“Watch me! Watch me!” they’d yell and then leap down into the deepest pool below.

Stretch Your Legs In Garston…

Nowadays Garston is moving on and looking outwards.

Travellers stream through on their way to the glories of Milford Sound or Queenstown and many of them stop at the Garston Green for a welcome break.

Kids race to recover from their long journeys on the playground. Adults discover the delights of  The Coffee Bomb, Craft Keepers and The Hunny Shop.

…Or Stay A While

But some opt for more than a quick stop.

Fishermen, bikers, hikers and those who just want a slice of rural peace and quiet, can all find a bed at the Garston Hotel or at one of the lovely B&Bs dotted around the district.

There’s no denying that living in the country has its challenges. Farmers tend to work the daylight hours: short in winter, long in summer. And of course, in the spring lambing and autumn harvest seasons, work can continue well after dark.

And almost every trip requires a car: we’re simply too far from everywhere to walk.

But despite that, Garston is a special place to be. Friendships run deep and beauty surrounds us every time we step out the door.

I am lucky to call this little slice of New Zealand home.

Eventually, I plan to have many more profiles of the enterprising people who live and work in Garston, Athol, Kingston and beyond.

If you (or someone you know) would like to feature on Time of my Life I’d love to hear from you.

If you live further afield in the South and feel your story would be a good fit for Time of my Life, I’m happy to help. Contact me to arrange a time to connect.