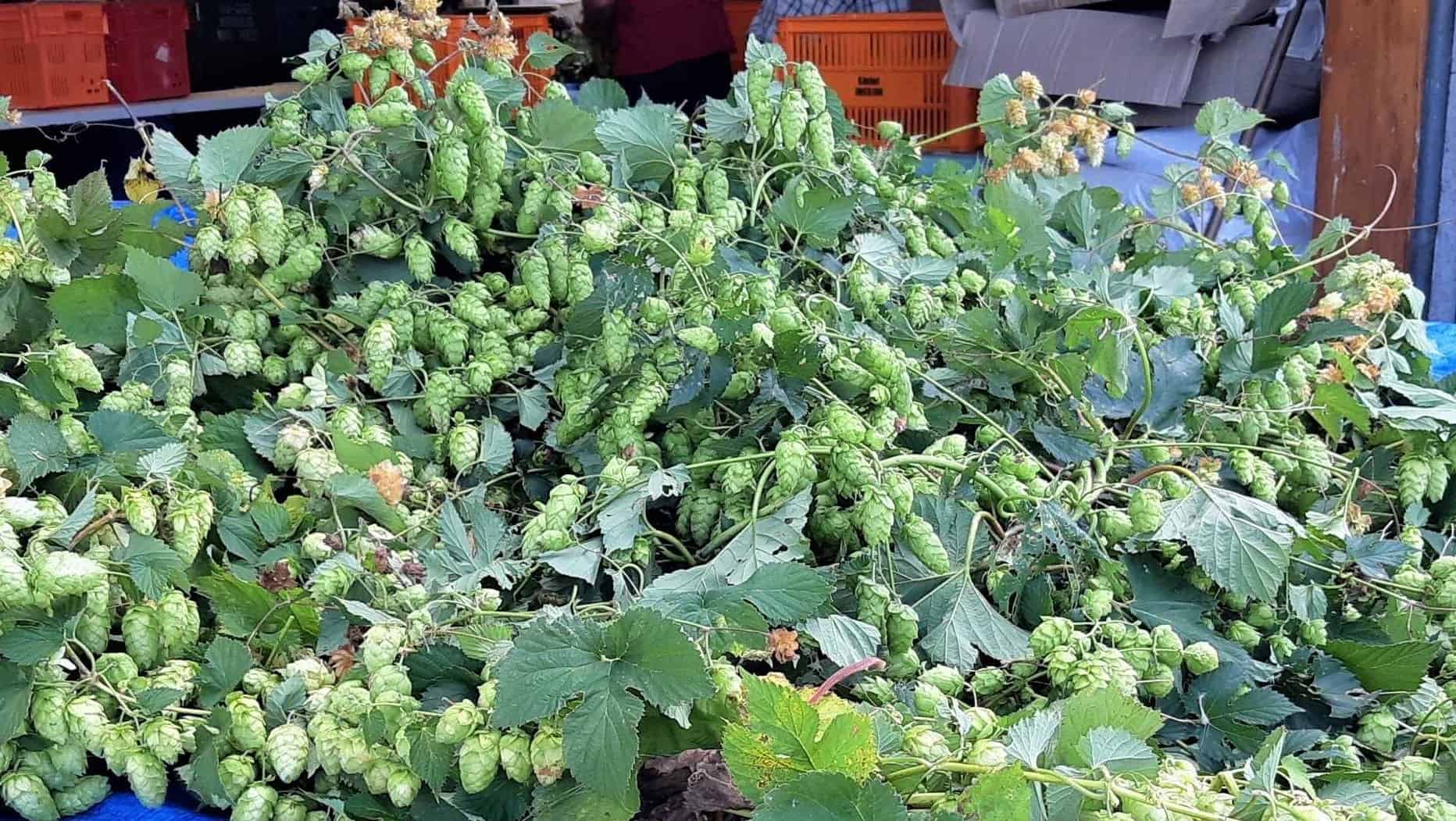 Take 30+ curious beer aficionados and a bumper crop of hops. Throw in a delicious barbeque and a keg of Altitude Brewing’s best thirst-quenching brew. Mix with a dollop of music and you have yourself a recipe for the Garston Hops 2019 Hop-Picking Party.

200 hop vines on two farms —  all of them covered in ripe, cone-shaped flowers. A tiny window of time in which to pick them —  and only two busy farmers both trying to juggle multiple farm jobs. The big hop companies have this process all mechanised, but we’re a tiny outfit, just starting out.

James, as usual, had an idea.

“Let’s get a sponsor, a couple of experts and a whole lot of people who would love to know more about hops and throw a Picking Party,” he suggested.

Waiting For The Harvesters

The day dawned damply. River mist shrouded the paddocks, evaporating our plans for an early start to the hops harvest.

Just as well, really. We’d all been flat out preparing the woolshed —  aka the hops harvest zone — for the last two days. Rarely has a working woolshed looked cleaner.

Waiting for the sun enforced a last minute calm before the storm of activity set to come. That’s why, after the final job was done, we gathered for coffee at the Garston Hotel and waited for our guests to arrive.

And, suddenly, there they were:

The sun shone bright and warm. Finally, it was time to begin.

Gathering At The Hops

The convoy wound its way to the vines. For many, this was the first time they had seen hops growing and I must admit, even our small plantation makes for an impressive sight.

Hops will grow as high as you let them (in our case 4 – 5 metres) and produce copious amounts of flowers, all filled with a distinctive-smelling resin. This is the gold that flavours the beer.

The party was underway.

Picking Off The Hops

It would be highly impractical to try to pick all the flowers off the vines while they’re still standing 5 metres tall. I’ve picked them off the top several times while getting samples for testing and, believe me, the novelty soon wears off.

A better idea is cutting the vines at the top and bottom and carting the whole vine to the processing room. That lets you lay them flat on a table and have multiple people plucking the flowers from each vine.

So that’s what we did on the tables set up in Hamish’s woolshed.

It wasn’t long after the Garston Hotel cooks appeared before delicious smells filled the woolshed.

They had brought an incredible array of delicious rolls, salads and food to barbeque. And after several hours of steady picking, everyone was more than ready to gather outside in the sun for lunch. Eliott had provided a keg of light, delicious beer from his brewery and that went down a treat.

We All Learn More About Hops And Beer.

Richard Schneeberger was our invaluable expert who was taking a busman’s holiday from his day job as a hop adviser in Nelson. Up until now, we’ve been going on guesswork and advice from afar, so it was wonderful to have Richard right there to answer our questions.

After lunch, both Richard and Eliott spoke and gave highly interesting and informative glimpses into their hop-and-beer worlds.

But, hops won’t pick themselves, so we up-ended our beer glasses and went back to work.

Between our plantation and Hamish’s we had four hop varieties to harvest and keep separate from each other. They were all destined to go straight to Altitude Brewing so Eliott could make his 2019 version of a Garston Green Hops beer.

Or so we thought.

But the truth soon dawned: somehow we had not fully computed just how many thousands of flowers we’d actually have. There was no way that Altitude could take them all as green hops. Some would have to be dried.

So we resurrected the drying racks that Aaron Abernethy built for us back in 2017 and Plan B swung into action.

Finally Finished And We Give Heartfelt Thanks

At the end of Day One we gathered at the Garston Hotel for a celebratory drink. It had been a wonderful, hard-working and satisfying day.

Our new Queenstown friends, and our local friends and family headed home, happy with their new experience.

Eliott was already busy with plans to begin his green hop brew.

And we were making plans for the next day’s harvest.

In the end, it took four days to pick and process the flowers from our 200 vines. Many local friends and family came back again and again to help over those days and we are so grateful to them for their help.

To all those who came to the party, WE COULDN’T HAVE DONE IT WITHOUT YOU.

Thank you, too, to RICOH, whose sponsorship of our event is truly appreciated.

We can truly recommend the Garston Hotel’s delicious barbecue lunches. Thanks, guys, for coming to the party – and for all the other meals we ate at your establishment.

And, finally, thanks to Dwane and Annie Herbert for lending us so many crates. They are invaluable and we needed every one of them.

Did you come to the hop picking party? Let us know how you enjoyed the experience in the comments below?

Does a hops harvest on this miniature scale sound like fun? Want to join in on next year’s party? You can comment below or send me a message.

Our 2018 harvest was an exciting, but far smaller affair. You can read how our venture began in

Hops in a hurry

Aaron Abernethy is not only the valley’s go-to-engineer for all farm machinery needs, but he is also a talented metalwork sculptor. Read all about Aaron’s beautiful creations in

This year we enjoyed learning how to grow saffron when Steve Daley of Te Anau-based Kiwi Saffron planted a trial crop of these precious flowers on our farm.

Dwane and Annie Herbert are staunch supporters of Athol and Garston locals. Even though they’ve now moved their fishing business south they were still more than willing to lend us their new, clean crates.

2 Replies to “Party On: Harvest Festival At The Hops”