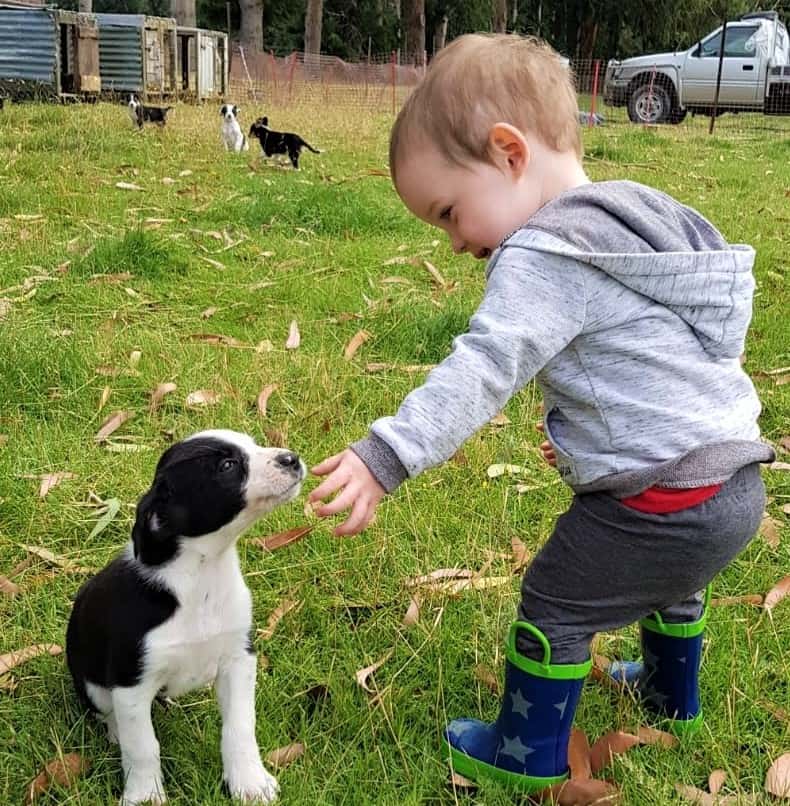 Kids and puppies are inseparable when they’re young and they inevitably end up teaching each other a few valuable life lessons.

Even though our kids have long ago grown up, our son decided that I needed to keep honing my puppy-raising skills.

So, here’s a quick look at some of the cutest babies currently on the farm.

Rose is the undisputed team leader of Chris’s dogs. The first pup he ever raised, she’s become a classic heading dog: small, slender and sassy.

When you put her with sheep she’s all business. You’ll see her crouched low, eyes fixed on her target, ready for business the moment Chris gives the command.

She’s got her eyes fixed on the Muscovy ducks too, so I keep them well apart. Rose would probably have duck for dinner before I had time to shout “NO!”

Time has sped by since Rose first came on the scene and already she’s 6 years old. In November, Chris decided that if he wanted to breed from her the time was now. So he played matchmaker with a friend’s equally talented dog… and we waited… and waited.

It seemed a long time before Rose began to show signs that she might be pregnant. But as she went from scrawny to roly poly we got the feeling that she had plenty of puppies inside.

Chris built a secluded puppy-raising sanctuary under the walnut trees, far from all distractions. With a spacious kennel and a ramp for when the pups were ready to climb out it had everything a new mum could want.

“I hope she doesn’t eat them,” Chris remarked the day they were born. Well, that gave me something new to fret about.

But we needn’t have worried. Over the next few hours, Rose gave birth to ten gorgeous puppies and proved herself to be an exemplary mother.

All The Babies Are Growing

Rose was very much on guard for the first week. Even Chris only approached her at mealtimes; the rest of us kept a respectful distance. Eventually she calmed down enough to let us “raid” puppy headquarters.

A week later their eyes were open and they were just starting to toddle. Now they were the perfect size to meet the farm’s other beloved toddler — our grandson, 19-month-old Harvey.

Puppies grow fast and at 5 weeks these little guys kept busy all day playing around their kennel.

They didn’t stray far from home — until one memorable morning.

Racing down the ramp came the hoard of yapping puppies. Pushing and squirming, they dived into their two big bowls of breakfast milk and biscuits, while Terry tried to count heads.

“One puppy’s missing,” he reported. I choked on my cereal. This would happen the week Chris had gone mustering and left us in loco parentis.

We levered up the kennel to see if he’d burrowed underneath. Nope!

“People drive past so fast,” I thought. “They wouldn’t notice a puppy…” I dashed out to the nearby gravel road, praying.

“Please don’t let him be squashed.”

But there wasn’t a puppy in sight — thank goodness.

Rose had wandered off. Chris had left her untied because caring for ten rough-and-tumble infants was taking a severe toll on her limited supply of patience. Could the pup have followed his mum?

I searched the other dog kennels… under the trees… over by the tunnel house… in the long grass.

Surely he’d be crying if he was lost and far from home?

I was almost ready to admit defeat when:

Just one little bark came from the patio rose jungle beneath our lounge window. Thorns scratched my hands as I peered into the murky undergrowth. One brave puppy stared back.

“Come on, Tarzan” I laughed. “I’ll make you some breakfast.”

The Puppies Are Weaned

Puppy number ten  must have told his brothers and sisters about his adventures in the big, wide world because after that we found puppies everywhere.

There were puppies on the carport… puppies chewing the boots. Puppies in the garden… puppy poop on the lawn… puppies chasing the ducklings.

And driving the car down the drive became a task fraught with danger.

And Rose wanted nothing more to do with them. She had taken to spending most of the day sleeping on our carport couch — well out of reach of her mischievous brood.

“Build those pups a pen or I’ll shut them into a dog motel,” I threatened.

Do you think they’ve stayed in the spacious pen that Chris erected next to his dog kennels?

Of course not! There’s always a puppy or two pushing under the netting. We spot them sleeping with Archie in his kennel, or visiting their mum for a surreptitious snack.

But they’ve stopped wandering far and wide, for now, and ten pups always turn up for meals, so we’ll count that as a win.

Why these pups can’t be pets

It’s natural to love cute little babies — and at this the pups are adorable, so people often ask, “Can I have one as a pet?”

But, the answer is always “No!”

These pups aren’t suitable for a town environment, and here’s why:

Working dogs are the backbone of a sheep farm, and a good heading dog saves a farmer hours of work.

They rarely bark — it’s the huntaway that makes all the noise.  These pups will control the sheep with stealth, position and sheer willpower.

Heading dogs are bred to run for miles and to think for themselves. What’s more, the herding instinct is in their DNA. Lacking sheep, you’ll often find young dogs rounding up chickens or even attempting to herd small children.

With their energetic heritage and herding DNA these pups are bred for farm life — that’s where they’ll be happiest and do their best.

More Babies On The Blog

Do you have fond tales of animal babies too?