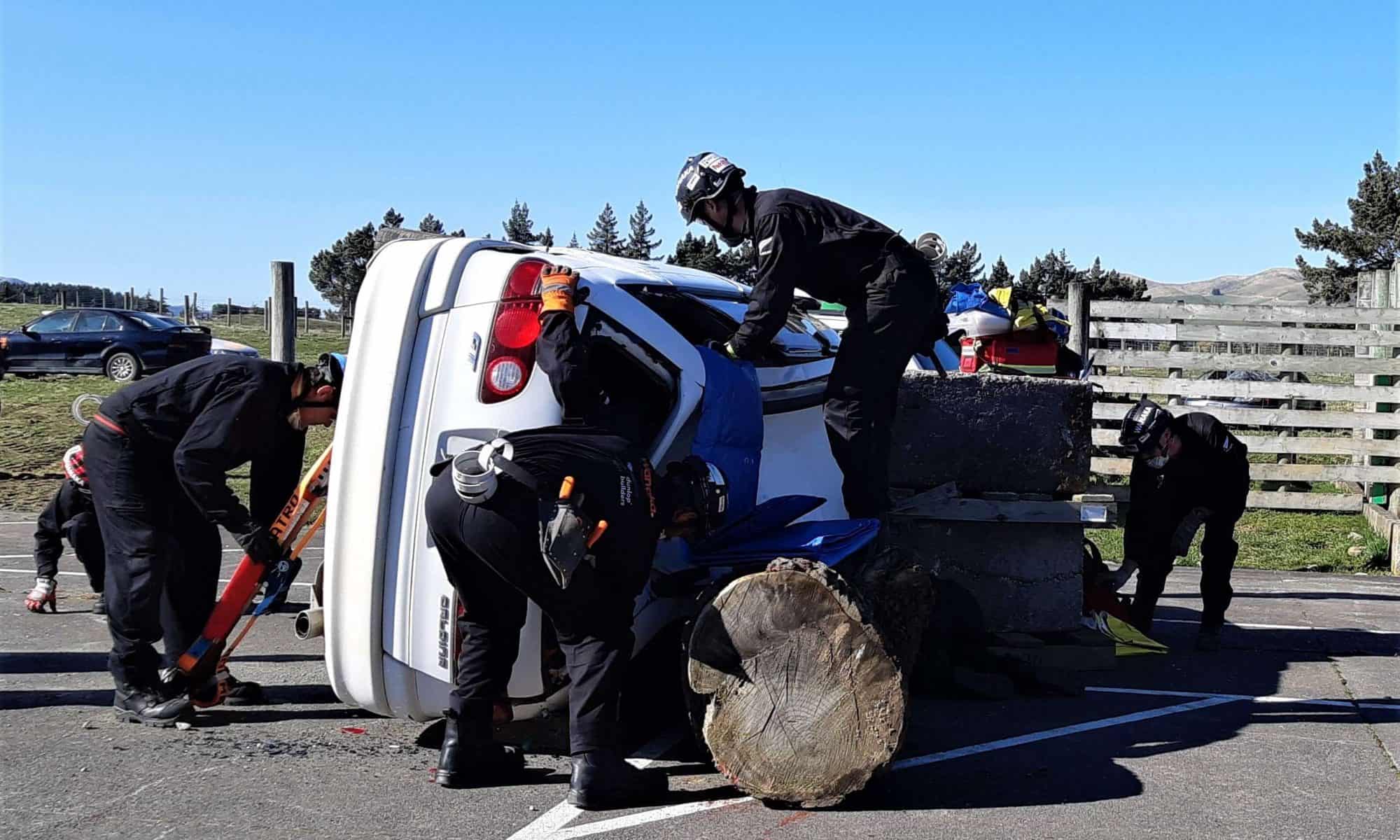 Back in August, the Mossburn Volunteer Fire Brigade hosted their first-ever Otago-Southland Road Crash Rescue Competition. It was an action-packed day for the five crews taking part. And it turned out to be riveting for the many spectators who lined the pits.

I had no idea what I was in for when I drove to Mossburn’s old Silver Fern Farms site early on Saturday morning. But I left in awe of the skills, and dedication of all the fire-fighting teams. You couldn’t help being filled with respect for the organisational skills of the Mossburn Fire Brigade.

What Is Road Crash Rescue?

Throughout the year, UFBA (United Fire Brigades Association) runs many events for firefighters. They aim to keep their members fit, alert and developing their skills. The Road Crash Rescues are among the most challenging competitions for both the teams and the organisers.

In a nutshell, teams of six firefighters race the clock to deal with road crash scenarios. Their mission is to rescue “trapped and injured survivors” from the wreckage.

Three judges scrutinize every move of the team. They award points for how well the firefighters deal with overturned cars or use the cutting equipment. The medical judge peers in to watch the medic as they treat torn limbs and head injuries. Another judge watches the team leader. Are they in control? Communicating clearly with their team?

In the competition, thank goodness, the victims are volunteers. At Mossburn, Robyn Shuttleworth worked make-up magic so the injuries looked real. But the skills honed in these competitions are exactly what rescuers need out on the road every day.

“It’s just like the real thing, but more intense. It’s like a road crash on steroids because of the time limits involved.”

Some Road Crash Rescue competitions are massive. The 2019 world comps in France had more than 50 teams. This RCR comp had five teams from Wanaka, Mossburn (A & B,) Balclutha and Milton.

But the size doesn’t matter. And all teams are important.

It might be your very first competition, like the Mossburn B team. Or you might be Australasian champions like Wanaka, who competed in France this year. Whatever the case, the goal is the same. To improve your rescue skills, build teamwork and camaraderie and save more lives.

Organizing this Otago-Southland RCR was a huge challenge for the 22-member Mossburn Volunteer Fire Brigade.

Over many months the team had to:

And deal with 1001 other details along the way.

Not only that, this small, but mighty brigade also entered two teams into the competition. Mossburn A had competed before, but Mossburn B was in the firing line for the first time.

The organising committee and the whole Mossburn Brigade surely gained an A+ after managing such a successful event.

RCR competitions are designed to both test and hone the skills firefighters need out on the road.

There were five parts to the Mossburn competition.

Outside in the pits, we saw:

Entrapped – use hydraulic cutting equipment to free a crash dummy from the scene.

Time Critical – the injured patient will deteriorate fast! Get them out in less than 30 minutes or less.

Inside we had the medical scenarios:

Trauma – team medics dealt with non-crash injuries. What do you do when faced with a dog bite? Or chainsaw injuries, a pedestrian accident, and a partially amputated arm?

CPR – each team worked on a CPR dummy to prove their skill and stamina.

The final section was Pit Workers. Here’s where teams took their turn at helping to set up the crash scenario for another team’s test.

The sound of crunching filled the air as the excavator smashed the old car’s roof. No wanton destruction here though. The digger driver’s job was to replicate the damage to a car that’s flipped and smashed into a power pole.

Next, Rachel buzzed up in her forklift and dragged the car to the pit. She made it look easy to flip a car on its side and haul in concrete blocks. When she added a huge log the accident looked even worse.

Finally, the volunteer victim hobbled out and clambered into the wreck. The scene was now set so the Wanaka RCR team emerged from isolation and sprung into action.

The car was wedged tight against the pole and a massive concrete block, leaving no access into the victim. So the team decided to winch it away. This is called turfing. Slowly, the car grated across the pit, away from the barriers. Now the team had room to move and the medics moved in to diagnose and reassure the patient.

It seemed to take ages and yet no time at all for the firefighters to cut into the car. Slowly, carefully the medics emerged with their patient. Another successful mission completed and a job well done.

We Owe Volunteer Firefighters A Vote Of Thanks

Rural firefighters spend more time attending accidents than fires. They give up countless hours to train. Then there are courses which take up their weekends. Or fundraising events to arrange. Everything takes time, energy and money.

All this, so they can be ready to drop whatever they’re doing as soon as the fire siren sounds. Whether it’s a car crash or a fire, they’ll be there to help.

But they put up with boring jobs too. Standing for hours on the road in the freezing rain to direct traffic around a rescue scene. Hanging out fire hoses to dry after smoke-filled hours putting out a bush fire. Completing their logbooks.

So, I say many thanks to all our volunteer firefighters. Our rural communities are safer because you are willing to help.

Were you at the Mossburn Road Crash Rescue Competitions?

Welcome and thanks for dropping in.