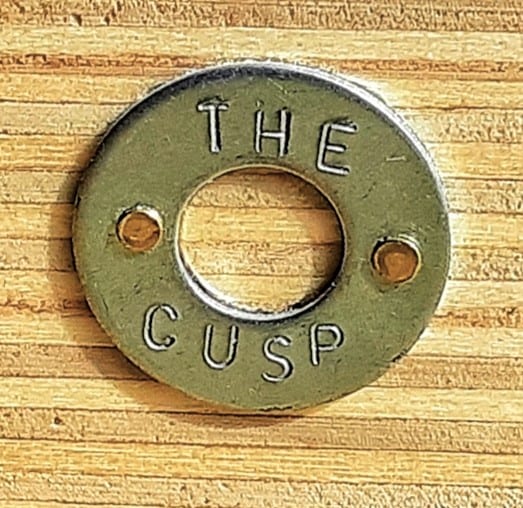 Something delightful about all the people I get to interview for Time of my Life is the way their faces light up when speaking about their work. After all, we’re discussing their dream, and their passion shows. And no one communicates that delight more clearly than Kim Patterson and Stephen Counsell. It was a real pleasure to meet them at their little workshop and to learn more about their dream business, The Cusp.

Step Inside The Cusp

“Would you like to see the workshop?” asked Stephen. “I’d better warn you, it’s a little bit cold in there.”

In fact, the little, one-car garage where Kim and Stephen work their Cusp magic was actually more like an icebox and I quickly understood the wisdom behind Kim’s winter work uniform of thick fleecy jacket and sturdy overalls.

But the temperature was soon forgotten, as they began to show me around their fascinating Aladdin’s cave of a workshop and to tell the story behind their business and their dream.

How It All Began

Kim and Stephen met in the busy Customs department of Queenstown’s International Airport. They started work about the same time and recognised in each other a kindred spirit. The two quickly became friends and supporters in what can — at times — be a crazily stressful job. Their personalities, complementary strengths and weakness, and most importantly their shared love of “tinkering in the workshop” made for a firm friendship.

In those days, of course, there was no talk of a business. But the idea was sparked in mid-air as Kim leafed through a magazine and a page caught her eye. It was only a small article about a woman who upcycled and restored furniture, but as she read, Kim’s imagination took flight. By the time the plane landed she was convinced they should give it a go.

And that’s exactly what she said to Stephen next time she saw him. “Read this,” waving the article under his nose. “We could do that!”

Kim and Stephen began by rescuing, restoring and upcycling furniture. It was a hobby that gradually began to take on a life of its own. Their first piece was a chest of drawers rescued on its way to the dump. Battered, bruised and topped with an indelible ink stain, the poor thing was sorely in need of some TLC.

Stephen and Kim worked their magic and brought it back to life. The ink was never going to come out, so they painted a bright, simple geometric design over it and voila! Problem solved. They put the piece up for sale on Queenstown Trading and it sold within an hour. Exciting stuff — and even more so when the new owner came back and asked for more.

But when you’re restoring furniture, each unique piece presents its own set of problems to solve. It takes time and skill to think, design and source materials — not to mention the actual physical work of restoration. Then, once that project’s finished you move onto the next, which presents a completely different set of problems. Those hard-won solutions are often not transferable to the next piece of furniture. It seemed, that with just two people, furniture restoration wasn’t sustainable as a business.

From Restoration To Design

However when Kim and Stephen began designing their own furniture that issue was suddenly resolved, especially when Stephen learned how to use CAD — Computer-Aided Design — software.

Of course, it still takes hours and hours, with many problems to solve when designing the prototype of a new line. But once that’s done other, similar pieces, can be made in a fraction of the time.

An easily recognised example is the stylish Cusp coffee table. Like many of their reproducible pieces, the table is made out of plywood used in a rather special way.

A New Way To Use Plywood

If you know as little about working with wood as I do, you’ve probably seen plywood, and even heard the term, without knowing much about it. Usually, you would see the large flat surface on walls and furniture. But The Cusp furniture uses plywood turned on its side so that you see the plies (layers) in all their work.

I found the method truly fascinating.

Once a piece is designed, the design is then broken down into shapes and those shapes are etched into sheets of plywood by Winton-based Nigel Molloy Joinery. They’re delivered looking rather like giant model aeroplane sets.  Stephen and Kim then finish cutting out the pieces and glue them together. The result is a distinctive piece of furniture. You’d recognise The Cusp style anywhere.

The other side of The Cusp’s business comes from commissions for bespoke solutions to their customers’ problems.

Arguably their breakthrough commission came from the Remarkables Start Early Learning Centre when they commissioned a “seat with a wow factor” to grace the foyer of their (then) brand-new centre.

This was the seat that led Stephen to learn about CAD — a huge learning curve that required hundreds of hours hunched over his laptop; learning, searching for advice and practising until the designs in his head appeared on the screen as intended.

When they finally unveiled the seat plans to the clients there was a pause then both ladies breathed “Wow!”

Clients often come to The Cusp because they have a problem that off-the-shelf furniture won’t solve.

Stephen and Kim have designed sturdy furniture for Airbnb houses, solved a lighting dilemma for an electrician and filled many problem spaces with made-to-measure, elegant furniture.

The smallest commission to date was for a soil sieve but their largest — apart from the seat — is one currently in design.

The brief is definitely impressive: a desk, with filing-cabinet-drawers that pull out as steps which lead to a sleeping loft with tatami mats (Japanese sleeping mats). Oh, and can you make it feel like a treehouse?

The Cusp motto kicked into gear: “We can do that!”

Kim and Stephen are highly appreciative of all the help they’ve had along their journey so far. Their respective partners — Gary and Lisa —  are right behind the venture.

What’s more, it is rare for a client to commission only one piece. Their happy customers keep coming back for more, which means The Cusp now has a waiting list.

Stephen can’t speak highly enough of Nigel Molloy Joinery for the help and encouragement they’ve given over the past year, especially with their generosity and aid while he was learning Computer Assisted Design.

Their “can do” attitude and “Give Great Service” values resonate with Kim and Stephen, who have a similar ethos at The Cusp.

What’s In A Name?

When I asked where the name came from they laughed because Kim’s original suggestion — Funky Fufu — now seems so impossible and absurd.

It was Gary Patterson who came up with the breakthrough name and the more you think about it, the better the name seems to fit this unique little business.

Connect With The Cusp

Queenstown Features On The Blog