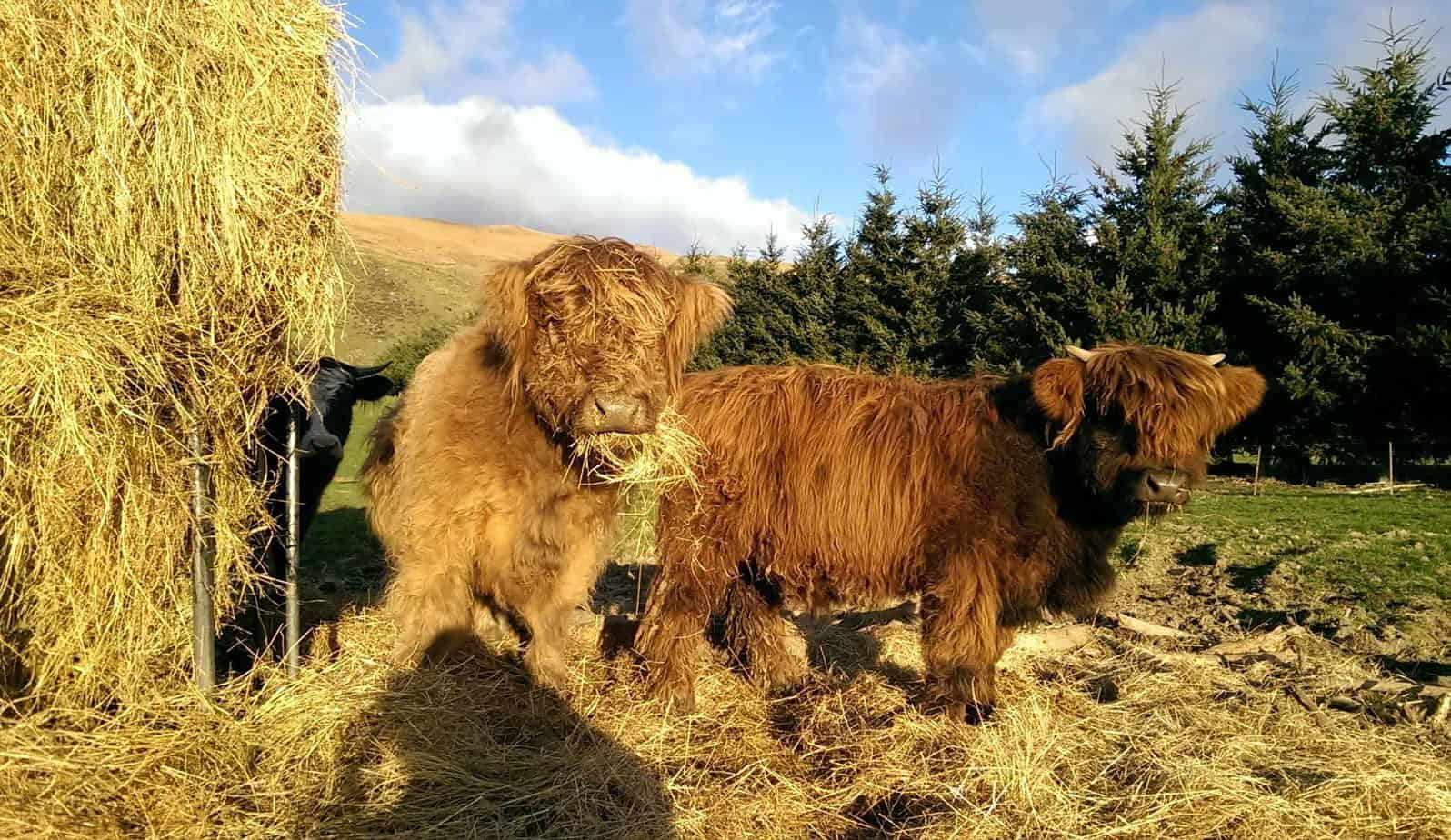 Winter is an interesting season on the farm. It gets cold down here in the South. Not frigid like Siberia, or Alaska of course, but chilly by New Zealand standards. The grass doesn’t grow much in winter and feeding out takes up a big part of the farmer’s day. Of course, it wasn’t always as easy as it is today.

These days Terry can handle the feeding out by himself. The tractor. a feed-out machine and our new, automated grain bin are all he needs to be a one-man-band. But it hasn’t always been that way.

The Bales Were Smaller Back Then

When I first came to the farm, feeding out was a two-person job. Instead of the mammoth-sized round bales of today, we used to make the hay in rectangular bales tied with twine. These were small enough for one person to lift by hand.

We kept the hay dry in big barns which were dotted around the farm. There was an art to stacking it — the bales had to be interlocked so that the whole stack felt solid and wasn’t in danger of falling apart while you climbed on it.

Every day we would drive the red Land Rover truck up to a hay barn and load the hay onto its flat deck. Once again, we had to carefully interlock the bales as we stacked them — often higher than the cab. It was quite easy to lose your footing and fall off the back as the truck bounced along. Having a heap of bales tumble on top of you made the fall much worse.

I learned that the hard way one day when the hay, two kids and I all came off the deck. Fortunately, it happened in slow motion and no one was hurt. I was much more careful with my hay-stacking-technique after that.

Once the bales were loaded, we would set off to feed a mob of sheep. One of us drove, while the other balanced precariously on top of the hay bales ready to feed the sheep. The job wasn’t too difficult.

First, you cut the string of the hindmost bale with a sharp pocket knife then tossed wads of hay out to the milling sheep below. Usually, it easily separated into sections and wasn’t hard to throw down.

As soon as the first bale was gone, you cut the strings of the second one, stuck the open knife in the bale behind so it didn’t get lost, and started throwing hay again.

There was an art to it of course:

Once out of the paddock, we jumped off the deck and shut the gate with freezing fingers. It was a relief to hop into the warm cab while the truck returned to the shed to pick up the next load.

It was difficult to find the best gloves for the job. Certainly, thick, sturdy ones were no good. I couldn’t handle the knife if the gloves were too thick. However, woollen gloves quickly wore out, and I went through several pairs each winter. Even the holey ones were better than nothing, but they did get soaked when you fed out in the rain.

Oh yes, this wasn’t a fine-weather job. Just like the postman, we were out in all weather. It didn’t matter if it was raining, snowing or just a hard frost, the sheep had to be fed.

Adding In The Grain

In July we added grain to the feeding out routine.

The grain bin was a huge, heavy affair, with two compartments. The grain poured into it through a tricky-to-start augur in the grain silo. Fortunately, it held enough barley or oats to feed several mobs of sheep before having to be refilled, so you only had to do that once a day.

One person could manage on his own, but it was a precarious and dangerous task. It was much safer to feed the grain with two people on the job.

Terry usually drove the truck, slowly towing the bin around the paddock at exactly the right speed. He had to be especially careful only to drive on firm ground. Parts of the paddocks got very wet over winter, and it paid to know which bits were safe to drive on, and which parts would get you bogged.

And She Who Ran Behind

My job was to open the slot at the bottom of the bin so that the grain fell onto the ground. I would pull a handle sticking out from the bottom end of the bin, and the whole slot would open. Then I either trotted behind the truck and bin or leapt up onto the towbar and rode until it was time to close things down.

This was easier said than done. Sheep love grain even more than hay, and they mobbed the bin well before we even started feeding it out. I had to carefully check the flow of grain too. There had to be consistent flow so that each sheep got the right amount to eat.

That depended on how fast the truck was moving and how far I had managed to open the slot. Sometimes the grain was sticky and I had to climb on top of the bin (while it was still moving) and poke it down the hole.

When enough grain had been fed, it was time to shut off the flow. The opening was easy enough because I just grabbed the hooked handle and let the truck’s momentum pull it open. However, closing the slot was more difficult.

The truck couldn’t stop when the bin was open because the grain would pile out. So I had to run behind on the slippery ground, bend down low and push the stiff handle back in. I usually carried a heavy spanner with me because it was much easier to give the lever a hearty whack and close it that way.

I Get To Drive…

Sometimes I was allocated the driving role. This was tricky too. The sheep mobbed front of the truck too and were in grave danger of being run over. I wasn’t allowed to drive too fast, but too slow was just as bad. If I misjudged the speed the farmer would yell!

Then there was the problem of knowing exactly where in the paddock it was safe to drive the truck. Sometimes the ground looked firm enough, but in reality, a bog lay underneath just waiting for me to fall into its trap.

…But Not For Long

Etched forever in my mind, is the day I got the bin stuck not once, not twice, but three times in the same paddock, right outside my brother-in-law’s house. Terry had to pull the truck and bin out each time with the tractor, much to the delight of my audience of three little boys. I learned a few unrepeatable words that day, and exactly where the wet spots were in that particular paddock.

Eventually, modern times caught up with us on the farm. We bought a new baler which made big round bales (actually cylindrical in shape.) However we didn’t buy a feed-out machine for another two years, so to feed out we had to unwind the bales by hand.

Loading the round bales was much quicker — the tractor did all the work. But feeding out the hay required a whole new technique.

The bale fitted exactly onto the Land Rover’s deck, which left a toe-hold in each corner for me. I clambered round and round, peeling off swathes of hay, clinging spider-like to the ever-decreasing bale. It’s a wonder I didn’t fall off every single day, but my balance must have improved because I stayed on most of the time.

Moving With The Times

Feeding out changed forever when we bought a brand-new feed-out machine. Now one farmer could handle the whole job alone.

Feeding out was tougher 35 years ago, but for a new-to-the-job farmer’s wife, it was a lot of fun too. I was sad, in a way, to see my role go, but there’s no denying that the whole process is much easier now.